A basic knowledge of chromosome abbreviations / terms is required to interpret cytogenetic test results. Typical human cells contain 23 chromosome pairs (46 total chromosomes). Twenty-two of these pairs are autosomal (non-sex) chromosomes. Each autosomal chromosome is referred to by its number, one through 22. The remaining two chromosomes (the 23rd pair) are referred to as sex chromosomes and are identified as either X (female) or Y (male). Females have two X chromosomes while males have one X and one Y chromosome.

Abnormalities are described by identifying the involved chromosomes and specific locations, when applicable. The location is described when an abnormality involves only a specific section of a chromosome or when a translocation has occurred. The location is defined by two pieces of information, the chromosome arm and the arm region. The arm refers to the short (p arm) or long (q arm) end of the chromosome on opposite sides of the centromere. The arm region describes the distance from the centromere. See Figure 1 below for a depiction of the chromosome arm and arm regions. Definitions of common cytogenetic abbreviations and terms are provided in Table 1. 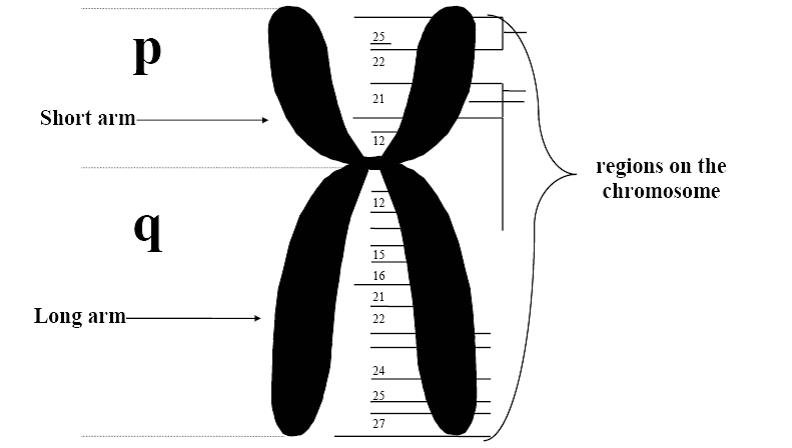 Karyotyping, also referred to as conventional cytogenetics, is performed by culturing cells (growing cells under controlled conditions) until they reach the dividing phase. Techniques are performed to visualize chromosomes during cell division so various bands and reconfigurations are seen. Karyotype assessments typically examine around 20 cells. Figure 2 below shows an example of a karyotype. The chromosomes are arranged in numerical order with sex chromosomes included last. 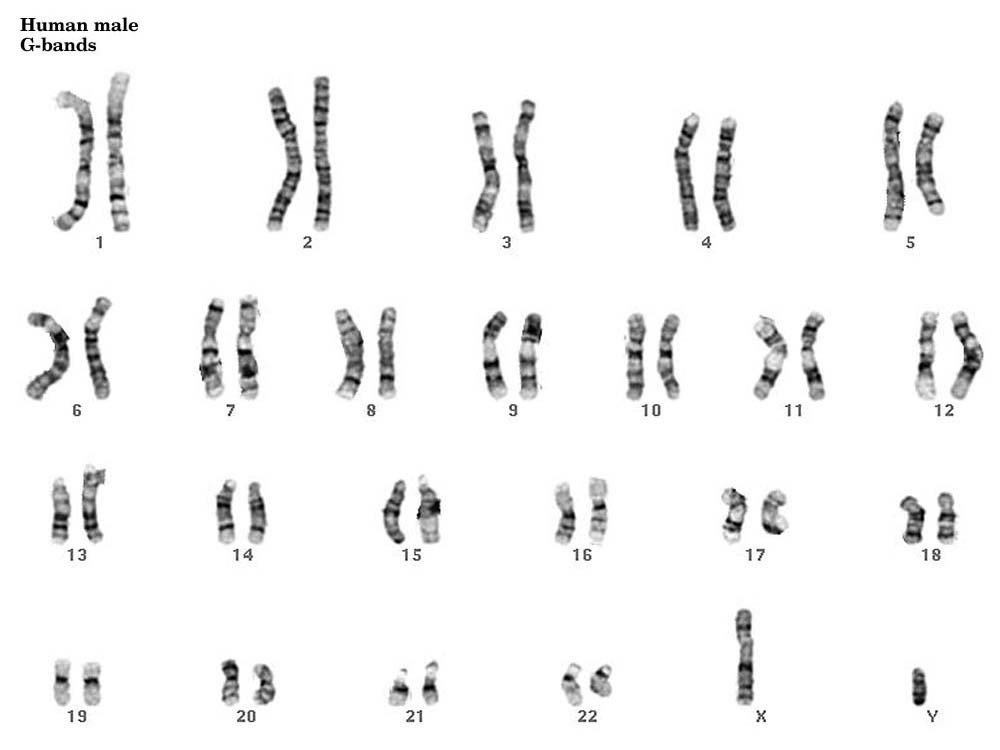 When reporting karyotype results, a data manager must distinguish between clonal and non-clonal findings. Clonal abnormalities are present in multiple cells and indicate a separate cell line, such as a malignant population, is present. If an abnormality is only detected in a single cell (or two cells in the case of deletions), it should not be reported. In this case, the finding could represent an isolated non-clonal abnormality or an inaccurate observation by the examiner. Refer to the general reporting guidelines below when determining which abnormalities to report.

FlSH is a molecular cytogenetic technique using fluorescent probes that bind to a specific part of a chromosome (i.e., the probes recognize and bind to fragments of DNA). It is a sensitive technique that can assess hundreds of cells per test. Theprobes are mixed with cells from the tissue sample. A fluorescent “tag” is then used to visualize the binding of the probe to the cells. Probes can identify the number of chromosomes or gene copies within a cell as well as the relative locations of specific genes or chromosome regions. Unlike karyotype assessments, FISH can be done on non-dividing, or interphase, cells. A FISH assessment typically examines between 200 and 500 cells.

Each probe has a specific target or set of targets and is therefore only capable of detecting abnormalities associated with that area. Additionally, the type of probe used affects the interpretation of the results. See below for descriptions of common categories of FISH probes.

It is important to know what a FISH assessment is testing for before trying to interpret the results. For instance, a probe specific to the p arm of chromosome 9 would not be capable of detecting a deletion anywhere on chromosome 4. In Figure 4 below, two cells were exposed to centromere enumeration probes (CEP) specific to chromosomes 6 and 8 in order to determine the number of each chromosome present. Both cells have two copies of chromosome 6 (green probes) and three copies of chromosome 8 (red probes). This FISH result indicates the presence of a trisomy of chromosome 8. 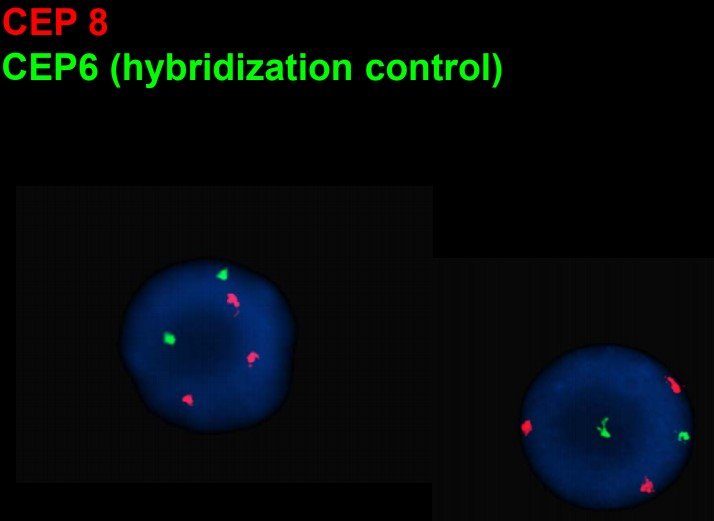 FISH results are usually provided as a percentage or ratio of cells, for which, an abnormality was detected. The result may also be accompanied by a normal range to define when the test is considered positive for the abnormality being assessed. An interpretation / impression section of the report is also common and should be referenced when reporting testing results. Figure 5 is an example FISH report. It includes the identity of each probe, the number of abnormal cells, the normal range, a result for each probe, and a final interpretation. The report confirms the TP53 and CEP12 probes detected abnormalities; however, the TP53 probe did not detect an abnormality at a rate above the normal cut off value (7%). The final interpretation indicates these findings represent a gain of chromosome 12 (trisomy). 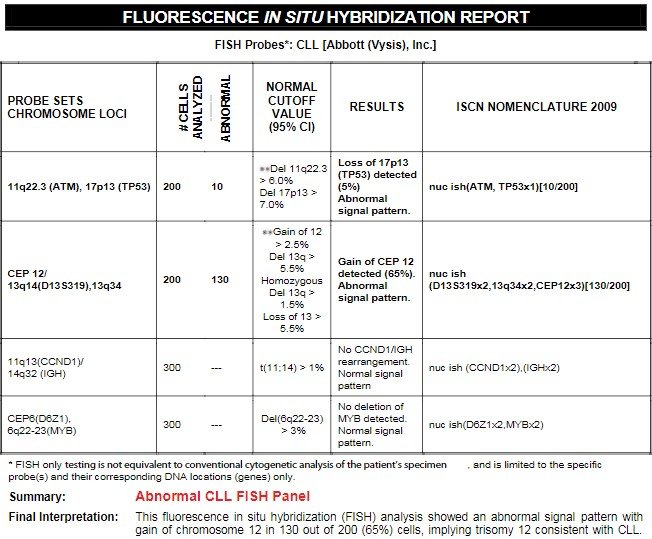 FISH reports may only refer to a probe by a gene name without indicating the chromosome number / region. For example, the report in Figure 5 could have only specified an ATM probe was used without also indicating the gene location was 11q22.3. It may be necessary, depending on the CIBMTR form, to know the gene location to accurately report the test results. The laboratory performing the study is the best resource for more information about the test that was done. A probe search can also be done using the HUGO Gene Nomenclature Committee’s website genenames.org. This website provides gene symbols, approved names, associated names, and chromosomal locations for many of the probes in current use.

Cytogenetic assessments can be performed to identify markers of disease, determine chimerism following an allogeneic cellular infusion, or both. Cytogenetic assessment of chimerism is usually only done for sex mismatched pairs of recipients and donors. In these cases, a karyotype or FISH study can determine the ratio of cells containing female vs. male sex chromosomes. A unique form of karyotype assessment, Q banding, can also be used to assess chimerism for sex matched recipient and donor pairs; however, molecular techniques involving PCR amplification are much more common.

Disease assessment by cytogenetic methods involves the identification of disease-specific markers (e.g., -7, del(5q), Philadelphia chromosome). Once a marker is identified, cytogenetic assessments can be repeated to determine whether the marker, and therefore the disease, is still detectable. The types of markers identified can affect the disease classification and inform the treatment plan. A cytogenetic assessment cannot be considered a disease assessment until this method has detected a marker of disease. In other words, if cytogenetic studies have always been negative, the recipient’s disease is not considered to be assessed by this method because there are no known cytogenetic abnormalities to evaluate. Pay attention to the wording of the question on the CIBMTR form being completed. “Was testing performed?” may be answered differently than “Was the disease assessed?”

CIBMTR forms generally capture chimerism data separately from disease assessment data. Therefore, it is important to know what information can be reported based on the assessment performed.

Manual Updates:
Sections of the Forms Instruction Manual are frequently updated. The most recent updates to the manual can be found below. For additional information, select the manual section and review the updated text.